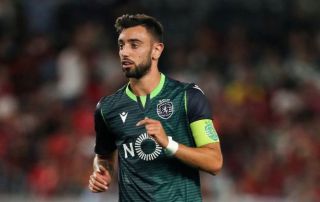 Bruno Fernandes to Manchester United transfer links have dragged on throughout the summer.

We have heard multiple sources, notably from Portugal that the Sporting Lisbon midfielder would move to Old Trafford during this transfer window.

But with now just two days left until the transfer window shuts, it appears the Reds will not sign the Portuguese international.

Fernandes had been seen by many fans as the answer to the lack of creativity in United’s midfield. The 24-year-old scored 32 goals last season at Sporting, and was reportedly available this summer.

However, according to respected journalist Sam Pilger, there was never any concrete interest in signing the midfielder.

Pilger explains that there was some early interest in Fernandes, but he was not seen by the Reds as worthy of his asking price.

Unless something dramatic happens, Bruno Fernandes will not be joining #MUFC this week. There was some early interest, but ultimately seen as overpriced and not worth the hype or money by the club. Portuguese and Italian media have over exaggerated interest all summer.

It’s disappointing that with just two days until the transfer window that Ole Gunnar Solskjaer still has no central midfield additions.

Surely this was the area the club needed to strengthen in this window, given the recent departures of Marouane Fellaini and Ander Herrera.

Hopefully the Reds can still conclude a deal in the coming hours, with rumours of a move for Christian Erisken now beginning to hot up.

The Telegraph report that United are exploring  the possibility of signing the Tottenham midfielder before the window shuts.