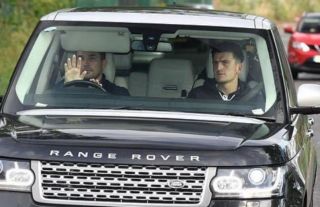 Harry Maguire has arrived at Carrington training ground ahead of his transfer from Leicester City to Manchester United.

After a long summer stand-off, United finally agreed to a £80m deal to sign the England defender after the Foxes stuck to their guns over the transfer fee.

Pictures are doing the rounds on social media of Maguire this morning, on arrival to Carrington where he is likely to complete his medical before being announced as Ole Gunnar Solskjaer’s latest signing.

Following Saturday’s win over penalties over AC Milan in the International Champions Cup, Solskjaer said Maguire may feature in the club’s first game of the Premier League season against Chelsea.

The boss was sounding extremely confident that the deal will get over the line very soon.

When asked if Maguire could be lining up for the Red Devils in their first competitive game of the season, Solskjaer had a positive response.

‘Let’s get the last details over the line but yeah,’ Solskjaer said, as quoted by the Metro.

‘He’s played a few games over the summer so we’ll have to assess him if and when.’

It’s only a matter of time now before they announce Maguire officially as a United player.

Harry Maguire has arrived at Carrington, as per the Mail. 🔴 pic.twitter.com/HHchcR8rMl