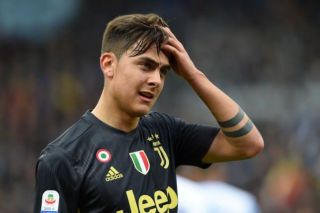 Although the transfer window closes for English clubs in four days, Manchester United are being made play the waiting game to see if Juventus playmaker Paulo Dybala will sign for the club with Romelu Lukaku heading in the other direction.

The rumours have grown legs and arms since the idea was first released to the media, and it has been suggested that Mario Mandzukic could be thrown into the deal too.

After returning to Italy, Dybala was given some extra time off from training and is not due to return on Monday, 5 August.

The Daily Mail claims the 25-year-old needs to notify Juventus of his intentions tomorrow, which could speed up the process of revealing the Argentine’s intentions.

If a deal is not done before 5pm on Thursday, one does wonder where that leaves Lukaku because it’s unlikely that United will allow the Belgian striker leave after the deadline. Italian clubs can still sign players after the 8th.

If Dybala deicides against the swap deal, it could put a deal for Lukaku in some doubt even though United are open to losing the striker this summer.

The Times report that United has already negotiated a deal which would see Dybala and Mandzukic come in exchange of the Belgian. While I’m not convinced by the Croatian attacker, Dybala would fit United’s system a lot better than Lukaku.

Juve apparently like the idea of signing Lukaku without paying a transfer fee, and they’re obviously trying to get Mandzukic off their wage books at the same time. The arrival of Matthjis de Ligt this summer will see the Serie A champions spending significantly more on player salaries, not to forget Cristiano Ronaldo who joined last year.

Juventus are happy with the terms of a transaction that would allow them to secure Lukaku without paying a transfer fee, while shifting Dybala and Mandzukic off a wage bill swollen by the high-cost acquisitions of Cristiano Ronaldo and Matthijs de Ligt. #mufc [Times]

Most of the reports we’ve read suggest that both United and Juventus are confident of a deal being agreed, but it all comes down Dybala’s final decision to moving to Old Trafford.

United look set to complete the signing of Harry Maguire from Leicester City, so with the official announcement still to come, we could be in for a busy few days as fans.