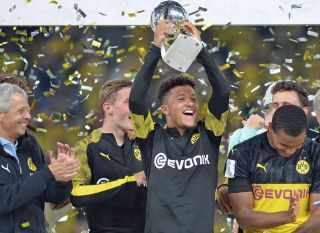 The 19-year-old England international scored a superb solo goal as he ran from the halfway line in the second half of their 2-0 victory.

BVB will be hoping this is a sign of things to come this season after running Bayern Munich close in the Bundesliga last term. They now hope Sancho can lead them and go a step further to clinching the German title once again.

Paco Alcacer scored the first just after the break but it was Sancho who took the plaudits after his display.

Belgian midfielder Witsel has said the Munich defenders were “scared” of the skilful winger, who was wanted by United this summer but committed his future to Dortmund.

“Jadon is damned talented,” Witsel is quoted by the Mirror.

“Even Bayern’s defenders are scared when he has the ball. But that’s normal because Jadon just has a lot of quality.

“He is fast, technically strong and he can score goals as well as put his team-mates in the spotlight. He is really a complete player.”

Sancho was without question the key man for Dortmund, assisting one goal and scoring the other.

Bayern will find it difficult this season without the legendary duo of Franck Ribery and Arjen Robben.

The Red Devils will have a greater chance of landing Sancho next summer, if they find a way back into the Champions League again.

Back in June, The Express ran a report claiming Sancho was one of the transfer targets United are keen to sign.