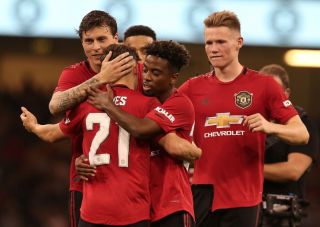 Six wins out of six for Manchester United this summer.

Ole Gunnar Solskjaer’s men now have every reason to be feeling optimistic about their chances this season, even if our activity in the transfer market raises more questions than answers.

The manager will try get the best out of what he has available to him — but he needs to identify a leader or two in this squad to depend on. It’s early days yet but the signs are few and far in between.

Marcus Rashford, David de Gea, Daniel James, Jesse Lingard, and Angel Gomes all took to Twitter after the win over Milan, some thanking the fans for their support and others looking forward to the Premier League kicking off with a clash against Chelsea at Old Trafford.

Check out the tweets below.

Pre-season is over. Next stop: Old Trafford 🙌🏼🔴 pic.twitter.com/AfQR7jJAQ5

6/6 ✅ Thank You To All The Fans For Your Support Throughout The Tour 👏🏾 #MUTOUR pic.twitter.com/1Q8bmwopsf