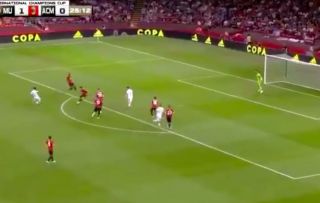 Manchester United could not hold on to their lead against AC Milan for very long.

Suso had threatened moments earlier, but made no mistake this time as he curled the ball past a helpless David De Gea from just outside of the box.

The goal came after the Serie A side capitalised on Nemanja Matic’s mistake; the Serbian was dispossessed in a dangerous area in midfield.

It was a poor piece of play from Matic who must be more alert if he starts next week’s Premier League game against former club Chelsea.

The Reds are clearly missing Paul Pogba in midfield, who is absent with a back spasm.