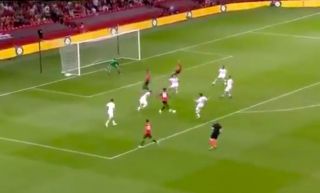 Marcus Rashford has given Manchester United the lead against AC Milan in Cardiff.

The young forward showed blistering pace on the counter-attack before taking on two Milan defenders and cutting in off the left.

Rashford then struck a well-timed shot into the bottom corner which went in past Donnarumma via a slight deflection.

The 21-year-old has now scored three goals during this pre-season, and is hitting top form just ahead of the new season.

Rashford is almost unstoppable when in full flow, and looks to have the beating of the AC Milan defenders operating from the left wing.

It had been a slow start to the game but hopefully Rashford’s opener will open the floodgates to score a few more against the Serie A outfit.

Check out his great effort below.