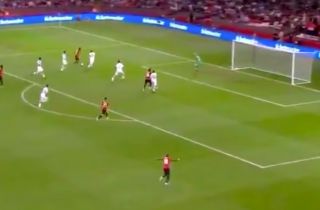 Jesse Lingard has come off the bench to score Manchester United’s equaliser against AC Milan in Cardiff.

The England midfielder received the ball from Anthony Martial on the left hand side and slotted home with a classy left foot finish into the bottom corner.

In truth, it has not been deserved from the Reds who have been poor in this evening’s game.

However, the substitutes made by Ole Gunnar Solskjaer, including Lingard and local hero Daniel James have given the Reds renewed energy and confidence.

United will be searching for a winner to maintain their perfect record this pre-season tour after victories over Perth Glory, Leeds United, Tottenham, Inter Milan and Kristiansund.

Paul Pogba has been particularly missed for the Reds who have looked lethargic in midfield and been sloppy in possession.