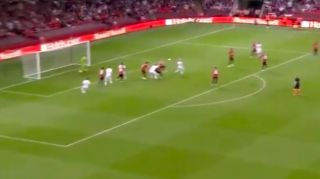 AC Milan have deservedly taken the lead against Manchester United at the Principality Stadium in Cardiff.

It’s been a laboured performance from the Reds, who have struggled to maintain possession and been poor in defensive areas.

Ole Gunnar Solskjaer’s perfect pre-season record is now in jeopardy with the Serie A outfit the dominant side in the Welsh capital.

It’s not been an ideal end to the summer tour and the Reds will be hoping Harry Maguire is signed and ready to start next Sunday in the Premier League, to help sure up the defence.

Welshman Daniel James is on for the United, who will hope to turn the game around in the final stages.

Check out the AC Milan goal below, with poor marking and closing down allowing the Rossoneri to take the lead through Victor Lindelof’s own goal.

Castillejo gives the Rossoneri the lead – the last touch may have come off Lindelof, however. #MUFCMilan | #SwypeSportsLIVE pic.twitter.com/IaXh8p6mFD