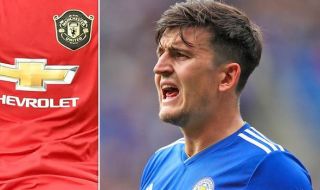 Manchester United fans have already created their own rendition of the famous Harry Maguire chant.

Maguire is set to join the Reds imminently after the club finally agreed a deal with Leicester for the England centre-back.

The 26-year-old will cost United around £80m (BBC), and will complete is medical this weekend before finalising the transfer.

United have desperately needed a central defender all summer and it is fantastic news for manager Ole Gunnar Solskjaer that it finally looks like he will acquire his prime target.

Many fans are also delighted with the new signing, and have adapted a chant to suit his move to Old Trafford ahead of today’s final pre-season friendly against AC Milan in Cardiff.

We can see Maguire becoming a firm fan favourite alongside Victor Lindelof in defence; let’s hope he is ready to start against Chelsea in the opening game of the league next Sunday.

Check out the chant below: