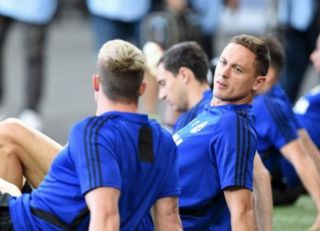 The importance of Paul Pogba’s presence in Manchester United’s midfield has been underlined in the first-half against AC Milan in Cardiff.

The Frenchman is missing from this evening’s friendly with a back spasm and the combination of Scott McTominay and Nemanja Matic have struggled in midfield.

There seems a lack of energy with the pair holding in midfield, particularly Matic who has had a poor half in truth.

Matic’s mistake was responsible for AC Milan’s equalising goal; he was dispossessed on the ball before Spanish playmaker Suso curled home on the edge of the box.

Many United fans have lamented Matic’s performance so far, and there is a concern whether he is ready to start next Sunday’s Premier League opener against former club Chelsea.

See some half-time reaction below:

Midfield is a disaster. McT will be fine next to Pogba + 1. Pereira not good enough, Matic looking worse than last season. https://t.co/75VEPWhAvC

Without Pogba in midfield Manchester United are struggling to keep possession. With Matić and McTominay AC Milan know that the quality of passing is not as high and, thus, are positioning themselves 10-15 yards higher. With Pogba, they would be forced deeper which opens space.

Matic pushing for a move to AC Milan, great performance for them so far

– Utd’s passing disjointed without Pogba
– Martial to start No.9 vs Chelsea
– Rashford the best player so far
– Pressing very good up until Utd’s goal
– Matic cannot be starting games
– DDG with a brilliant save
– Thank God we’ve signed Maguire 🤣 pic.twitter.com/Vrjyb9jl29

Nemanja Matić did not have a picture of his surroundings before he received the ball. Any player who opens himself to a pass in that position has to know his surroundings. This is a clear indication of his decline and why McTominay will be favoured over him in many games.