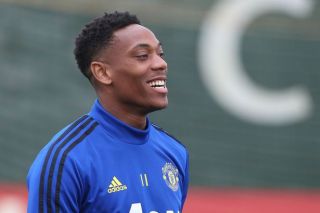 Ole Gunnar Solskjaer has named his starting eleven for this evening’s pre-season game against AC Milan at the Principality Stadium in Cardiff.

The Reds will be hoping to end their pre-season with victory over the Serie A side to complete their 100% winning record following victories over Perth Glory, Leeds United, Inter Milan, Tottenham and Kristiansund.

There is a new sense of optimism amongst United fans this summer after a torrid end to last campaign. The impending arrival of Harry Maguire and the additions of Aaron Wan-Bissaka and Daniel James gives fans reasons to be positive ahead of the new campaign.

NEXT:Potential Man Utd XI vs AC Milan: Tuanzebe to start and plenty of pace in attack

Paul Pogba misses out of this one with a back spasm, hopefully as a precaution ahead of next Sunday’s Premier League opener.

Marcus Rashford and Anthony Martial start up top, while there is a surprise start for Marcos Rojo in defence.

With the opening game of the Premier League season against Chelsea just over a week away, players now have their last chance to impress Solskjaer to make the line-up.