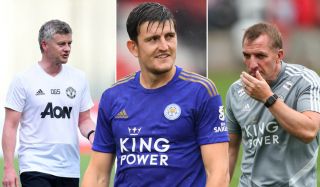 Harry Maguire’s dragged out saga is over with a £85m deal between Leicester City and Manchester United completed this morning, according to Samuel Wallace and John Percy of The Telegraph.

The 26-year-old was left out of the Leicester squad to play Italian club Atalanta at the King Power Stadium on Friday night, and now we know the real reason why…

He’s about the join Manchester United and become the world’s most expensive defender!

This announcement was coming all summer but it appears as though United dragged their feet for far too long.

Maguire should already be with United and have pre-season minutes under his belt with Ole Gunnar Solskjaer’s side.

Not only will Maguire be a solid addition to this current United side, he’s got plenty of time to become a much better player, and that will be one of the things that appealed mostly to Solskjaer.

The United defence hasn’t been good enough since the years of Rio Ferdinand and Nemanja Matic.

Maguire and co have a lot of work to do in order to serve up the consistent brilliance those two legends provided on the pitch at Old Trafford.