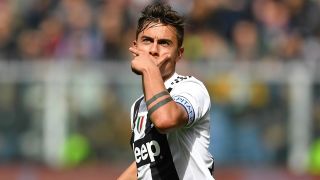 The Paulo Dybala saga is only a few days old but we’re already getting sick and tired of conflicting reports between Italy and England.

Apparently there’s a chance Dybala will sign for United this summer, with Romelu Lukaku moving to Juventus in a swap deal. That sounds very appealing to United and surprisingly in the eyes of the Italian giants too, but it all seemingly hangs on the Argentina international’s decision.

Juventus now appear to be on the brink of forcing Dybala out, by telling him not to bother reporting to training until next week, with the transfer window shutting for all English clubs on August 8.

Time is running out for Ed Woodward to get another signing in for Ole Gunnar Solskjaer to work with in the coming season, with another two players linked with joining: Bruno Fernandes and Harry Maguire.

The latest from La Gazzetta dello Sport claims Dybala has told Juventus directors he has no intention of signing for United, and that he’d prefer either to stay with Juve or join a club which better suits his style of play.

If true, this is likely to hold up the sale of Lukaku unless United and Juventus can come to another agreement.