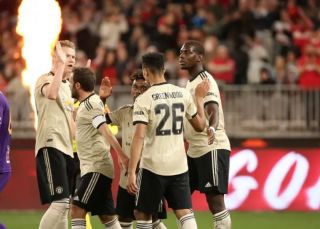 Manchester United take on Italian giants AC Milan at the Principality Stadium in Cardiff as they put the finishing touches to what has been a successful pre-season tour.

With the Premier League season kicking off next weekend, manager Ole Gunnar Solskjaer will want to make it six wins out of six against Milan on Saturday night.

A convincing win for United would crown them as the 2019 International Champions Cup, which only José Mourinho would count as an honour at the end of a season…

Milan, on the other hand, find themselves at the bottom of the 12-team table, having not picked up a single point and failing to score a single goal! That alone makes them sound like a bunch of walkovers!

READ MORE: What the future could hold for Smalling and Rojo should Man Utd sign £95m defender

But is just a pre-season friendly. Results don’t really matter as long as your players are reaching the required levels for match sharpness and fitness.

Eric Bailly has been ruled out until Christmas time, having undergone an operation on his knee.

Don’t expect to see Lukaku either, who doesn’t look like he will play for the club again as he engineers a transfer to Italy.

Milan will miss new signing Theo Hernandez after he suffered a torn ankle ligament in the friendly aganst Bayern Munich.

The results for both teams have been the complete opposite. Wins over defeats.

You can only see United making it 6 wins from as many games.