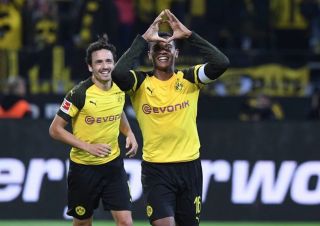 Borussia Dortmund defender Manuel Akanji has revealed how he supported Manchester United as a child.

Manager Ole Gunnar Solskjaer wants to add a defender to his squad before the transfer window shuts and at least he knows now that there is one at Borussia Dortmund would likely jump at the chance of joining the Red Devils.

As quoted by the Manchester Evening News, Akanji said: “In my childhood I had football in my head. My role models were related to my respective positions. My first role model was Raul. At the time I was still playing as an attacking player and was a fan of Real Madrid.

“Aside from Real, Manchester United were my favourite club. So at some point it [his idol[ was Cristiano Ronaldo. He impressed me with his performances.”

READ MORE: What the future could hold for Smalling and Rojo should Man Utd sign £95m defender

I won’t lie and claim to be an avid Bundesliga fan, but my knowledge of Akanji is limited. He could be the next Franz Beckenbauer or a sorry excuse for Phil Jones for all I know, though you have to wonder if he’s using this as a way to put himself on Solskjaer’s radar.

An admirable way of doing so if that’s the case.

But, seriously, what’s going to happen if the Harry Maguire saga goes down to the wire and United end up with nothing?

That has to be seen as a possibility at this stage, so it may be wise of the club to start opening doors elsewhere – and I’m not hinting at Akanji because, like I say, he’s an unknown quality to my knowledge.