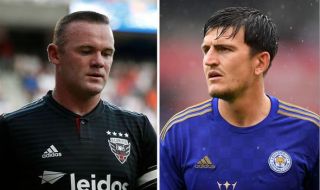 Time is running out for United to get the deal done with August 8 being the deadline for English clubs to make signings.

The Manchester Evening News claims talks are ongoing but the two clubs have yet to find an agreement over the valuation of Maguire. It is thought he could cost as much as £90m with United in desperate need to strengthen at the back.

That seems like a lot of money for the England international, especially when you consider how Juventus signed former Ajax skipper Matthijs de Ligt for less, as reported by Sky Sports.

United’s all-time top goalscorer Rooney approves of the 26-year-old joining his former club, which he discussed in an ESPN interview.

The 33-year-old is currently playing for DC United in the MLS and he’s been impressed by Maguire’s form for club and country, stating that he would be a good signing for MUFC.

“I think Harry’s a good player and over the last few years he’s improved as a player,” Rooney said.

“He’s gotten better, and he’s been a main player for Leicester City, but also for England.

“I think he’d be a good signing if they can get him.”

Many will focus on the transfer fee if Maguire signs for United, but we would complain just as much if he’s not signed and Solskjaer has to start Chris Smalling and Phil Jones in games next season.

The move to a big club could also make Maguire twice the player, like it did for Virgil van Dijk at Liverpool and the Leicester star is already better than all of Solskjaer’s defensive options.

We need someone to lead from the back and all reports currently point to Maguire.