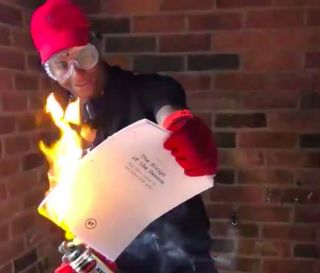 Marcus Rashford is clearly not happy at the suggestion that Manchester United will finish sixth yet again this season.

The England striker posted a video on his social media burning a document which predicted the Reds to finish 6th again, behind Man City, Liverpool, Spurs, Chelsea, and Arsenal this season.

The document was BT’s ‘script’ for the upcoming 2019/20 campaign, where statisticians from Opta and Squawka help predict the outcomes in the Champions League, Europa League, and of course Premier League where United have been given their lowly prediction.

The beauty of football is that it is unscripted drama, so it will be interesting to see how this document compares to the final standings at the end of the season.

We hope it turns out to be complete and utter nonsense, as no United fans, including Rashford could bare to see another season with the Reds finishing in sixth place and outside of the Champions League places.

However, manager Ole Gunnar Solskjaer still needs key new additions before the transfer window shuts in eight days time to give the Reds the best possible chance of achieving this season.