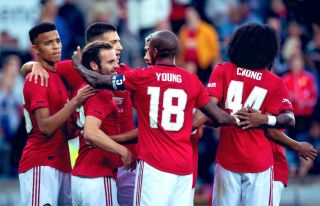 Manchester United recorded their fifth win from as many games on their 2019 pre-season tour on Tuesday night.

Juan Mata scored the only goal of the game from the penalty spot with just minutes left on the clock.

The Red Devils dominated the game but could be criticised for not being clinical enough in front of goal.

While Marcus Rashford had a long range effort saved after the break, he was among the players who should have opened the scoring a lot earlier.

That could be down to dusting off the cobwebs from the summer break, though Rashford’s finishing is something that needs work on but he’s not alone. United need to get better at taking their chances when teams are willing to sit back and soak pressure for 90 minutes.

Some of the players took to Twitter after the match to thank the fans for their support. Check out their reactions below:

Another win! Thanks Norway 🇳🇴🙏🏾 pic.twitter.com/IVyHe1iiBE

More minutes under the belt. Another win on our backs! 💪🏽 pic.twitter.com/VJzJ0EL623