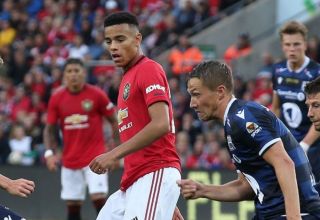 Mason Greenwood has been a stand-out player during Manchester United’s pre-season tour.

Suggestions have been made over the 17-year-old featuring against Chelsea in the opening game of the Premier League season on the back of some impressive displays this summer.

Greenwood was good again last night as United ran out 1-0 winners against Norwegian side Kristiansund.

He came off the bench on the hour mark when the game was scoreless, and although he didn’t add to his account for the pre-season tour, he livened the game up and caused Kristiansund plenty of problems.

READ MORE: What we learned from Man Utd’s 1-0 win over Kristiansund

The only goal of the game came from Juan Mata, who won and scored his penalty in stoppage time.

Greenwood doesn’t look like a youth team player and is destined for first team action this season.

Here’s how fans reacted to Greenwood’s performance on Twitter:

Mason Greenwood will be a bonfide starter by Christmas imo. Sensational talent.

@_MasonGreenwood’s ability to use both of his feet is absolutely beautiful. #MUFC

DJ is much better on the left than right.

Shaw has to drive forward more.

Greenwood is ready for the 1st team.

McSauce is ahead of Matic.

Axel is potentially the best CB at #MUFC.

Analysis of United vs Kristiansund:
– Scott McTominay deserves more respect
– Dalot will give great competition to Wan Bissaka
– Greenwood looked bright again alongside Chong
– Martial looks fitter and stronger than ever
– We must sign a creative midfielder/forward

The thing about Mason Greenwood is that ‘rawness’ is what makes him so exciting at times. Hope when he grows out of it he doesn’t lose anything. Rashford almost seemed to have a bit of a cull once he matured. #FullTimeJay

I’d start Greenwood against Chelsea because he’s better at 17 than the current alternatives and will only improve. James is a work in progress and the other wide options have deficiencies. Like Sancho at Dortmund, just play the kid and let him fly.

Mason Greenwood is so ready for the first-team. Already looks miles better than some players at the club and he’s only 17! Only going to get better 💪 #mufc pic.twitter.com/hoszdmGMy9

Mason greenwood is RVP with pace

Mason Greenwood looks like the most natural goal scorer at the club.

Mason Greenwood has been our best player in pre season. Start him vs Chelsea.

Mate, Mason Greenwood is a baller!

Mason Greenwood is special. We have one. #GGMU