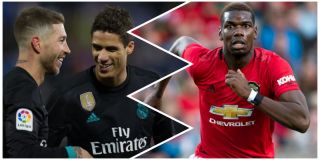 Real Madrid defender has spoken about the prospect of France team-mate Paul Pogba joining him at Real Madrid.

The world-class defender, who has attract interest from Manchester United in the past, believes Pogba would be a ‘fantastic addition to Real Madrid’s squad.

“I think we have a team. Pogba is a good player, I know him very well. For any team he would be fantastic,” Varane said, as quoted by the Manchester Evening News.

Man Utd hero believes it would be ‘best for everyone’ if Pogba leavesREAD MORE:

It’s always annoying when players of other clubs speak out about potential signings and it’s not something you hear players do whilst playing for United.

Wayne Rooney may have opened up about Harry Maguire in an ESPN interview this week, but he’s currently playing his football in the MLS for DC United.

Pogba has done little to put a stop to the speculation over his future, which doesn’t bode well with the transfer deadline coming earlier (August 8) for English clubs.

United have been adamant thus far with the Frenchman not being for sale. That’s not to say they can’t be persuaded by a tasty offer as every football has a price.

After losing Ander Herrera already this summer and not bringing in any replacements to date, it’s hard to have any confidence in the board that United will find someone in time to fill a potential void left by the World Cup winner.