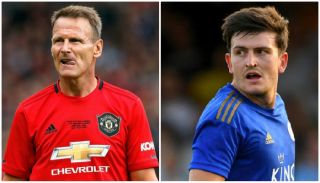 United are working hard to compete a deal which would take Maguire from the King Power Stadium to Old Trafford, but after more than one rejected bid the Foxes are proving to be tough negotiators.

Maguire is under contract and Leicester don’t feel like they should be forced into selling one of their most prized assets unless their transfer demands are met. A pretty straight-forward stance for a selling club to have during a transfer while waiting for a big club, such as United, to cough up the money or walk away.

United aren’t walking away though, and with Eric Bailly ruled out for the foreseeable future Ole Gunnar Solskjaer must add another centre-back to his squad and someone of real quality.

And Sheringham, who spent four years at Old Trafford, believes Maguire would be the perfect addition for his former side. He even likened him to Steve Bruce and John Terry.

“I think he would be perfect,” Sheringham told talkSPORT.

“I think he’s got a calming effect on player’s around him and he doesn’t panic when he gets on the ball.

“He’s good in both boxes, which is always a big plus for central defenders.

“Players like Tony Adams, Steve Bruce and John Terry – they’re organised – they don’t have to be lightning quick and instead organise people around them and make sure there’s no gaps at the back and that’s what being a centre half is all about for me.”

United have eight days to add to their list of completed transfers from this transfer window.

Daniel James and Aaron Wan-Bissaka are the latest additions and we’ve yet to get rid of any players.

It could be a busy week for the Red Devils.