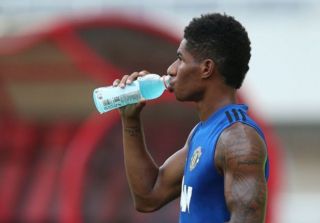 Rashford signed a new contract earlier this summer, keeping him at the club until 2023.

The England international looks set to lead the line for Ole Gunnar Solskjaer’s side again this season after relegating Romelu Lukaku to the substitutes bench towards the end of last campaign.

NEXT:Ibrahimovic advises Man Utd on how to deal with Paul Pogba transfer situation

Sheringham believes Rashford should now be used as Solskjaer’s main striker, with Lukaku reportedly on the move this summer.

“I think he’s got the lot,” Sheringham told talkSPORT as quoted by Manchester Evening News.

“He’s still only a young lad and he’s shown that he can score goals.

“If he was given the main mantle at Old Trafford now, I think it would be perfect for him.”

The 21-year-old has enjoyed an excellent pre-season for the Reds, but will need to significantly improve his goal tally if he is to do the job for United in the league this season.

Rashford scored 10 league goals last time out, but should have a target of 20 goals this season to prove he has what it takes to be the main striker at the club.

United face AC Milan in Cardiff on Saturday where Rashford is likely to feature, ahead of next Sunday’s Premier League opener against Chelsea at Old Trafford.