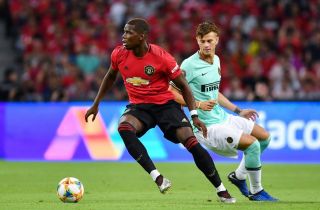 Teddy Sheringham believes it would be ‘best for everyone’ if Paul Pogba left Manchester United this summer.

Pogba’s future has been up in the air for some time but it now looks like he will remain at Old Trafford beyond the transfer window.

But while anything could happen in the coming weeks to change that, United have only until August 8 to make signings because the transfer window shuts early for English clubs. T

There’s still a chance he could leave for Real Madrid or Juventus past that date which would leave Ole Gunnar Solskjaer is a difficult position to find a player talented enough to fill the void, unless a quality midfielder or two is signed before the deadline.

Pogba has been the subject of criticism for his attitude and lack of consistency, however, he was still United’s top scorer in the Premier League with 13 goals. Not too shabby for a midfielder and it would reflect a lot better on United if the likes of Marcus Rashford could chip in with 20+ goals per season.

Former United striker Sheringham makes a big acquisition the Red Devils should replace Pogba with someone who ‘wants’ to play for the club.

“I think he’s upset a lot of people with his demeanour and his attitude at Old Trafford.

“It would be best for everyone involved if he left. If Real Madrid want him, whatever they’re paying, let him go.

“Use the money to go and buy someone who really wants to be playing for Man United, showing how good he is and what their worth is.”

❌ “He’s upset a lot of people. I think it’s best for everyone if he leaves the club.”

🤷‍♂️ “Start again with someone who wants to play for the club.”