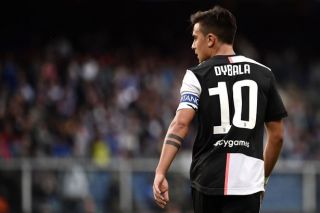 Sky sources say that a swap deal involving Romelu Lukaku heading to Juventus is ‘all but done’, so now the transfer just hinges on Dybala’s agreement.

NEXT:Man Utd hero says Rashford should be the main man at Old Trafford

Dybala, 25, would be an exciting addition for United given his versatility across the front three attacking positions. He could be deployed in the right-wing position where the Reds are currently lacking, as well as in behind striker Marcus Rashford.

This transfer would be ideal for manager Ole Gunnar Solskjaer who clearly does not see Lukaku fitting his style of play. Instead, the United boss could have a proven talent much better suited to his fluid attacking approach.

It now seems to all depend on whether Dybala will say yes to the move with just over a week to go until the transfer window shuts.

Loads of United fans are desperate to see the Argentine make the switch to Old Trafford.

Me praying for Dybala to say Yes! pic.twitter.com/U3ouhOgQCV

Pray to god dybala says yes to this deal I will literally go out and buy a shirt with his name on it he’d come to a club where they’d build statues of a player of his quality. #mufc #TransferTalk

All we need is the yes from Dybala. Please. I beg 😭 @PauDybala_JR

Even when I proposed to my girlfriend, I wasn't this desperate for a 'Yes' in response.