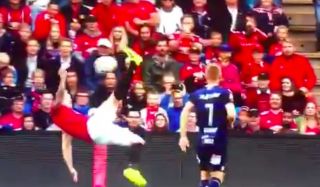 Phil Jones is not known for his efforts in front of goal.

The England defender has not scored a goal for the Reds since 2014, but fancied his chances in the opening stages of United’s pre-season friendly against Kristiansund in Norway.

Jones attempted to divert a looping ball goalwards with an acrobatic effort, that actually looked to be heading on target until he blocked the ball with his own hand!

Jones has come close to scoring twice so far for the Reds in their penultimate to last game of pre-season.

The score remains goalless despite a number of openings for the Reds.