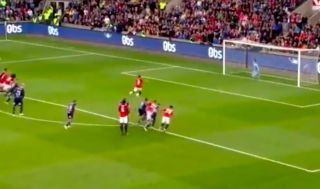 Juan Mata has scored a penalty to beat Kristiansund late on in Norway.

The Spaniard converted the spot-kick after winning the penalty; he was deemed to be brought down by the Kristiansund goalkeeper following an excellently weighted through ball from Paul Pogba.

This wasn’t the most convincing performances of the tour but Mata made no mistake and secured what was still a much deserved victory as United dominated proceedings in Ole Gunnar Solskjaer’s homeland.

United face AC Milan in Cardiff on Saturday in the final game of their pre-season tour.

Game ends 1-0 to Manchester United after Mata wins and scores in stoppage time. Hate seeing our players dive, even in a friendly. Pathetic.#mufc #mufctour pic.twitter.com/bJZCLOxVD9