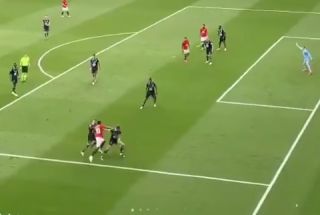 Manchester United made it five wins from five on their 2019 pre-season with a 1-0 victory over Norwegian side Kristiansund.

Marcus Rashford started the game on the left flank — with Anthony Martial played in a more central role — and had a number of opportunities in the first-half to open the scoring.

United as a team weren’t clinical enough but the home side deserve credit for their defensive play throughout.

Except for one of their defenders, who for a moment was left feeling a tad embarrassed when Rashford spun before nutmegging him and, as the kids say nowadays, sent him to the shops!

Man United Zone uploaded a video of the cheeky nutmeg, as seen below:

Thankfully, Juan Mata found the net before the end from the penalty spot.

It kept our 100 per cent record alive for this summer’s pre-season tour and keeps everyone optimistic ahead of the competitive season.