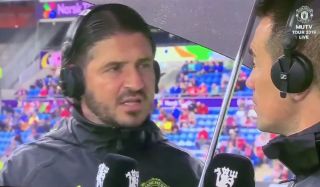 There has been lots of tension building over United’s business this summer after last season’s disappointing campaign, which saw the Red Devils finish sixth in the Premier League.

Fans feel let down by the club’s willingness to back new manager Ole Gunnar Solskjaer in the transfer window, adding just two young players to a squad clearly not good enough to compete.

It suggests that the Glazers are penny-pinching, happy to settle for top four battles season after season as long as the Champions League money rolls in.

That’s hard to take when you see rivals like Manchester City beat all around them, while Liverpool are successful in Europe.

But Djordjic sends a brilliant message to the club’s hierarchy from a fans’ perspective, as seen in the video below.