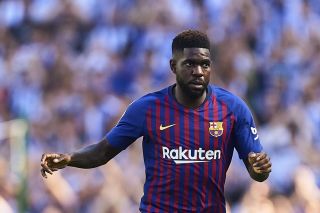 According to reports, Manchester United have identified Barcelona defender Samuel Umtiti as a potential alternative to transfer target Harry Maguire.

Leicester centre-back Maguire seems to have been identified as manager Ole Gunnar Solskjaer’s prime defensive target this summer, but the BBC say that the Reds have still not agreed a deal with Leicester for the player.

BBC’s report says that United think the Foxes’ asking price of £90m is ‘unrealistic’ after having a £70m bid turned down earlier in the window.

The 26-year-old trained as normal on Tuesday and there is no guarantee that United will get this deal over the line with just days to go until the transfer window shuts.

NEXT:Loads of Man Utd fans think they already have an alternative to transfer target Harry Maguire

And according to reports in France, the Reds are now ‘seriously interested’ in Barcelona defender Samuel Umtiti.

Le 10 Sport claim that United are willing to pay £46m for the French international, who is no longer a regular starter at the Nou Camp.

The Reds desperately need a defender with the news that Eric Bailly is expected to be out for ‘four to five months’ with a knee injury.

It looks like Maguire is still the primary target, but other options such as Umtiti may be looked at if the deal falls through, if these reports are to be believed.