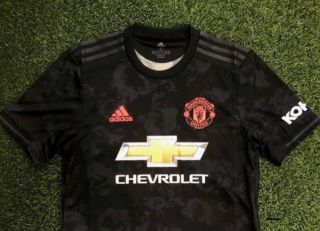 More photos are doing the rounds of what will be Manchester United’s third kit for the 2019/20 season, made by Adidas.

A third kit seems is released every year now as football clubs look to completely milk it by charging fans top dollar for the latest jerseys.

The kit is predominantly black with bright red logos on the chest and tonal 3 Stripes on the shoulders, while the sponsors (Chevrolet and Kohler) are white.

It is inspired by the Manchester Rose which is highlighted by an inscription on the bottom left side of the shirt, reading “110 Years – Manchester Rose – 1909 2019”. This is a reference to the 1909 FA Cup final when United beat Bristol City whilst wearing a white shirt with a red rose on the chest.

We’re fans of the new third shirt — even if we disagree with the need for three new releases every year — and it’s certainly less controversial than the away jersey.

The club are trying to claim the second strip was inspired by the Northern Quarter in Manchester but despite my many weekends falling around the area, I’ve never spotted a snake slithering along the paths!