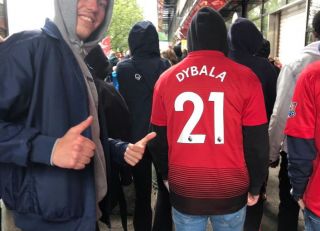 Oh dear. The transfer season can bring the worst out of some…

Harry Maguire has been long linked with Manchester United, BUT still remains a Leicester City player.

Paulo Dybala’s future is up in the air, BUT he’s started to be strongly linked with United the past week and still remains a Juventus player.

However, two United fans who are in Norway for the club’s pre-season friendly against Kristiansund have shirts with both players’ names on the back.

I don’t know whether to cringe or laugh. Most of us should be able to nod our heads in agreement that this is madness and another example of a modern football trend we wish would go away.

See the pictures below:

They’re asking for both deals to fall through!