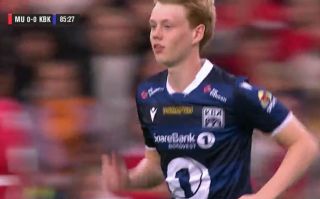 Noah Solskjaer, son of Ole Gunnar Solskjaer, has come on as a substitute to face his father’s side for Kristiansund in a pre-season friendly.

Despite having made a handful of appearances for the club’s ‘B’ team, the 19-year-old is yet to make a competitive appearance for the Eliteserien side at senior level.

The pair shared a memorable moment before Noah took to the pitch, with Ole leaving his bench to wish his son well.

READ MORE: ‘What a player’: These Man Utd fans think academy graduate is best player on pitch against Kristiansund

You can’t imagine how proud this will make the United manager feel and they will undoubtedly talk about it for years to come.

Even though Kristiansund lost the match 1-0, Noah played in the national stadium of his home country against Manchester United, currently managed by your father… Imagine that!

Check the photos out below: