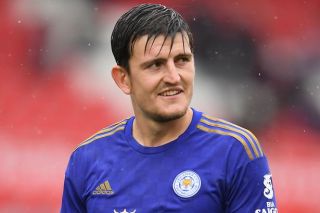 The England international has been strongly linked to United all summer, with the club’s manager Ole Gunnar Solskjaer desperate to strengthen his defence after a disappointing campaign last term.

Maguire has impressed in the Premier League in the last couple of seasons – going from Hull City to playing a key role at Leicester City, as well as becoming a regular for the Three Lions under Gareth Southgate.

Meanwhile, United leaked a whopping 54 goals in the league last season and Solskjaer knows they won’t get into the top four if that sort of record pops up season after season.

Time is running out with the transfer window shutting for English clubs on August 8, but it looks like there’s been some progress with respected journalist Fabrizio Romano among those providing updates on the situation, tweeting below that Ed Woodward is eager to get this signing done and that the player himself is keen to sign the dotted line at Old Trafford.

Man United will have new contacts soon with Leicester for Harry Maguire. Ed Woodward is working on this deal and strongly wants to sign the CB who Solskjaer asked. Talks ongoing, the player is pushing but Leicester have to decide soon. 🔴 #MUFC #ManUnited #LCFC #transfers

Beck updated his Instagram story to show that he’d been at United’s Carrington training ground, with the story also picked up by Fox Sports.

Harry Maguire agent @StevenBeckSSS at Carrington today, he’s also Garner’s agent tho, but cheeky time to upload this with all the speculation 👀🤔 pic.twitter.com/0cS7EMTSIX