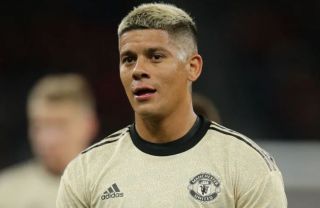 Marcos Rojo is said to be considering a move away from Manchester United if he believes first team opportunities will be limited next season, according to Rob Dawson of ESPN.

Ole Gunnar Solskjaer was impressed by the Argentine’s 45 minute display against Tottenham Hotspur in Shanghai last week, saying the defender had “taken his chance.”

But the Norwegian has six centre-backs in his current squad – Victor Lindelof, Chris Smalling, Phil Jones, Eric Bailly and Axel Tuanzebe — and is looking to sign another defender to strengthen his side at the back after conceding 54 goals in the league last season.

It looks like that new defender will be Harry Maguire, who, according to the Metro is angry about his transfer dragging on after Leicester City rejected two previous offers from the Red Devils.

Rojo spent a chunk of the campaign out injured, but still isn’t held in high regard by supporters who feel United are weak at the back and need solid enforcements before the new season kicks off.

Even though he has three years left on his contract at Old Trafford, the club would more than likely move Rojo on if a decent offer was tabled by another club and ESPN understands there is interest from teams in Italy, France and Spain.

The Argentina international has made 95 appearances in his three seasons at the club. He was signed from Sporting Lisbon in 2014 while Louis van Gaal was manager but a combination of injuries and competition for places has seen his time on the pitch cut short more so in the last year.

While Romelu Lukaku and Matteo Darmian were left behind for United’s trip to Norway on Monday – ahead of a friendly against Kristiansund on Tuesday – Rojo travelled with the squad and could make an appearance against Solskjaer’s hometown team.