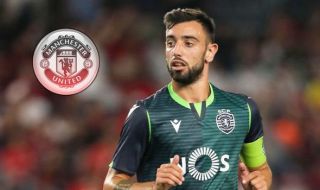 According to respected Italian journalist Gianluca Di Marzio, Manchester United are in the final stages of completing the transfer of Sporting Lisbon midfielder Bruno Fernandes.

Fernandes has been linked with a move to Old Trafford all summer, and progress finally seems to have been made in negotiations for the Portuguese international.

Di Marzio‘s report claims the Reds are ‘one step away’ from closing in on a deal for Fernandes, with talks in the final stages.

NEXT:Confirmed Man Utd XI vs Kristiansund: McTominay and Matic partner up in midfield

With just over a week until the transfer window shuts, this is fantastic news for fans if the reports are indeed true.

Ole Gunnar Solskjaer has been desperately lacking a creative spark in midfield as goals dried up towards the end of last season, but Fernandes could be just what United need.

Let’s hope this deal does materialise and United can complete a deal for the attacking midfielder they have appeared to chase all summer.