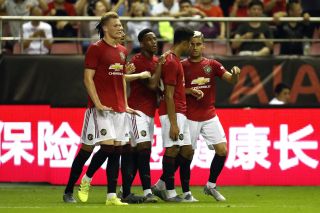 Manchester United’s Scott McTominay is on the cover of PES 2020 and fans can download the demo version for free today.

The Scotland international has come a long way from his days in the United academy — from breaking into the team under José Mourinho to having a real chance at being a first team regular this season with Ole Gunnar Solskjaer in charge.

Gamers will be able to download the demo today — July 30 — but there has been no announcement on the exact timing of the release just yet.

The demo will allow players select from 13 different teams, including United, as excitement builds for the new football season.

McTominay has impressed on the pre-season tour and he’s without question in with a shout of starting games next season, maybe even ahead of the experience Nemanja Matic, who didn’t have the best of times in the last campaign.

It’s great to see a young player blossom and that’s exactly been the case with McTominay, who wasn’t ever tipped for such heights during his time in the club’s academy.

Here it is! The OFFICIAL reveal of our Global cover for #eFootballPES2020, which launches on September 10th! pic.twitter.com/er682J68ku