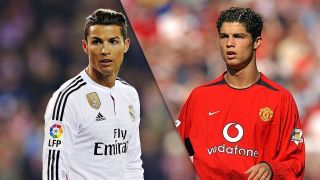 Manchester may be the city that saw Ronaldo grow into a man, but Madrid is where his family began so there’s bound to be memories there he will forever cherish.

He also conquered Europe with Real Madrid — winning the Champions League an incredible four times during his time at the Santiago Bernabeu — adding to his tally of five after lifting his first with United back in 2008.

But domestically, Ronaldo only won La Liga twice which has a lot to do with Barcelona’s dominance during that period.

Speaking about Madrid and Manchester, Ronaldo said, as per Manchester Evening News: “This (Madrid) is one of the most beautiful cities in the world. I travel a lot, but I haven’t seen many cities like Madrid.

“I hope to return to Madrid as soon as possible because this is a city I love.

“It wasn’t easy to leave Real Madrid after nine years.”

Now in Turin, Juventus won Serie A last season with Ronaldo in the side but they’re continuously making additions in the transfer market to push their way to European success.

It would be an incredible achievement for Ronaldo if he was to win another Champions League but with another club at the same time.

Ronaldo still looks back fondly at his time at Old Trafford and is considered a legend in the eyes of United fans, though nobody can doubt that his best years were spent in Madrid.