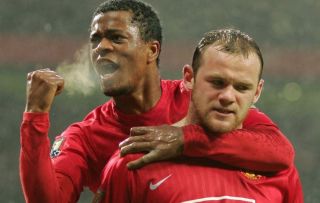 Patrice Evra announced his retirement from playing football on Monday morning and Twitter has been full of tribute messages for the former Manchester United left-back.

Evra played in some great teams with great players at Old Trafford, and Wayne Rooney being one of them has issued a classy message to his former team-mate.

For the younger United players coming through, Evra is one they could all look up to as a sporting role model for how his time at Old Trafford planned out. He understood the club and was easily one of the best left-backs in the world for a year or two.

Rooney and Evra were part of teams that won league titles and, of course, the Champions League in 2008.

Congratulations to my friend @Evra on a brilliant career. Some great years spent together and a few trophies won 😉. Best of luck in your retirement mate 👏🏆🙌⚽️ pic.twitter.com/Kwtol9XROV

We posted our own tribute to the legend,as seen below:

Wish this man the happiest of retirements. Absolute legend! 🔴 pic.twitter.com/nrzoIjNvUK