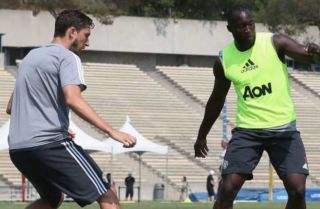 Romelu Lukaku and Matteo Darmian have been left out of Manchester United’s travelling squad headed to Norway as the pair edge closer to the exit door at Old Trafford.

It’s been a long time coming for Darmian, who hasn’t had a proper look in at United over the past two seasons, along with constant likes to a return to Italy.

Lukaku also seems Serie A bound with speculation growing over a move to either Inter Milan or Juventus.

It has been noted by BBC Sport reporter Simon Stone that the pair were not with the United squad as they travelled to Kristiansund, the hometown of manager Ole Gunnar Solskjaer.

The Red Devils take on Kristiansund, currently eight in the Norwegian top flight, in their next pre-season friendly clash on Tuesday evening.

Neither Darmian or Lukaku has played a minute of the pre-season tour thus far, and that’s unlikely to change now.

Meanwhile, Sport Witness have picked up on surprise reports from Spain suggesting Barcelona may be interested in signing Darmian.