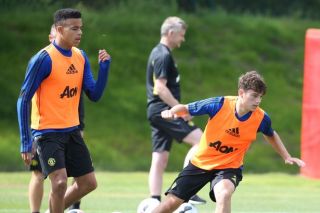 Manchester United’s next friendly will see Ole Gunnar Solskjaer’s side take on Norwegian side Kristiansund at the Ullevaal Stadion in Oslo.

These are familiar surroundings for Solskjaer (facing his hometown club) and the Red Devils are unbeaten so far this pre-season, winning four out of four games – including victories over Inter Milan and Champions League finalists Tottenham Hotspur. This should put the lads at ease and the manager is likely to field a young side with the competitive quickly approaching.

But there’s no reason to be overly confident. Last season United finished sixth, losing out on a Champions League spot, and all eyes are on Solskjaer ahead of his first full season in charge.

Midway through their third consecutive season in the Norwegian top flight, Kristiansund are seventh in the Eliteserien, just eight points off the European places. Their players will be fully fit, so hopefully that means ours will be challenged to some extent.

Eric Bailly suffered a knee injury in our previous outing against Spurs, with United winning 2-1, and he’ll definitely miss the match.

Romelu Lukaku and Matteo Darmian have been left behind with their futures up in the air.

There’s a chance we’ll see Alexis Sanchez get some minutes, while Timothy Fosu-Mensah is still recovering from a knee injury he picked up whilst on loan at Fulham last season.

It would be worrying to see United struggle against Kristiansund, even though they are halfway through their season, with the best defensive record in the Eliteserien (conceding 15 goals in 14 games).

Expect to see the young lads feature – Angel Gomes, Tahith Chong, Mason Greenwood – and put in an extra shift to put themselves in contention to make the matchday squad for the opening game of the Premier League season, against Chelsea.