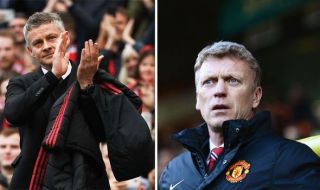 David Moyes has warned Ole Gunnar Solskjaer he is in for a tough season at Manchester United.

Last season, Solskjaer became the third United manager since the club sacked Moyes in 2014 but feelings are mixed going into the new campaign.

A lot of that comes down to matters that are completely out of Solskjaer’s hands, such as failure to get rid of deadwood in the transfer window, and only making two additions to a side that finished sixth in the Premier League last term.

Moyes got the United job on the back of being recommended by Sir Alex Ferguson. He didn’t last a full season because he was completely out of his depth, but at the same time he was at that point vastly more experienced than Solskjaer.

With that in mind, it’s going to be intriguing to see how Solskjaer does in his first season as manager at Old Trafford.

Speaking to The Mirror, Moyes reflected on the job Solskjaer has done so far.

“It is a tough job,” said Moyes. “You have seen how tough it has been for myself, Louis van Gaal and Jose ­Mourinho – very experienced managers have found it difficult.

“I think it will be another tough season for Ole, but he is trying to do everything to get it right. I hope he is successful. But there are massive expectations.

“Ole will be aware of that and know he has to do well.”

United have signed just two players so far this summer, with Daniel James arriving from Swansea City and Aaron Wan-Bissaka brought in from Crystal Palace to fix Solskjaer’s problem at right-back.

Another season of Ashley Young in the role would have been hard to watch.

But are two young signings going to make enough of a difference to get United back into the top four?

It’s a big ask, the club should have done a lot more this summer to back Solskjaer going into his first full season.

He added: “They have now chosen to sign some young players, and when you look back they signed Wayne Rooney from us at ­Everton aged 18. Cristiano Ronaldo was also 18 when he joined, so over the years they have had a policy of signing young players and many of them have been the best up-and-coming future stars.

“I think Man United just need to follow their values of old.”