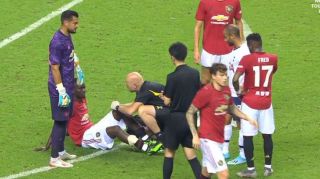 It was perhaps inevitable that at least one centre-half would be departing the field in a state of discomfort during this pre-season tour. Given our recent history in that position, an expectation for extended periods of health for any of the personnel is wishful at best and moronic at worse. Most defenders suffer injuries at some point in their career, but we seem to have made a speciality of it.

Eric Bailly had recently come back from an injury which he picked up in the league encounter with Chelsea back in April. The three-month spell caused him to miss the end of the Premier League season, along with the entirety of the African Cup of Nations. His recovery had sounded quite positive and fans were looking forward to him getting back to the promise he has displayed in his first season at the club. He may not have been first choice in many eyes but would be a capable back-up.

Unfortunately, he suffered a bad reaction in the game against Tottenham on his knee and was forced to leave the field on crutches. It was a similar injury which had blighted his career at the club so far. His aim was to prove his ability to Solskjaer, after being in and out during last season. It left the manager scratching head and pondering the next move.

Last season produced one of the most damning statistic in the post-Ferguson era of the club. We managed to concede 54 goals in a top-flight season. It was the worse in the Premier League era. Even the blunder ridden spell under Moyes was not as bad. In fact, we would have to go back 40 years to match such a terrible spell at the back. Given that the players are all internationals and have played at the highest level for many years, the figures become even more incriminating.

For all the good aspects that Ole brought into the club upon his arrival, the issue of letting goals in remained. Not all of these goals came during his reign as temporary and then permanent manager of course. Almost 30 goals were coughed up during the first half of the season when Jose was in charge. A manager who is usually meant to adapt a defensive minded view of the game. If he could not get a solid back-line, how could Ole?

The two major factors which have been letting us down in the past few years has been fitness issues and that of consistency. All centre halves spent a period on the side-lines at various points last year. Even Victor Lindelof had to miss a few games. When you throw in the records of Bailly, Jones, Rojo and Smalling, it becomes disastrous. Inability to nail down a secure partnership can only result in indecision. It still seems daft to blame De Gea for a challenging period in form when the players in front of him are constantly changing. Competition is one thing, but when you are unsure as to how long someone is going to stay fit for, doubt creeps into your mind.

The whole of last summer was dominated by Mourinho demanding a top-class centre-half. Some of the options seemed to be puzzling in terms of their age profile and recent lack of form. Most supporters recognised that a signing should have been made in that position. The argument used to help develop the current players through positivity can work to a certain degree. Not when they only last for a handful of games before getting crooked again.

Ed Woodward needs to see this fact. For the club to move forward, we need a degree of stability that is massively lacking. A designated defender is required in this side. Whether it is Maguire or Koulibaly or someone else. I would love to see Bailly return to the form shown in 2016/17. Strong in the tackle, good pace and a passionate defender. Pretty much all reds fans would also. He is expected to be out for at least six weeks, however. As it stands, we are going to be heading into the opener with Iceman and Axel. It’s when you look at the options below them that most begin to get cold sweats about. Get that chequebook out and save us another season of the chuckle brothers.