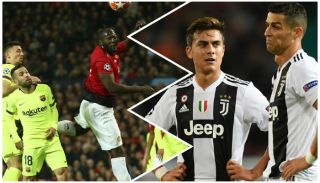 Inter Milan have been interested in Romelu Lukaku all summer but after weeks of stumbling over transfer fees and rejected bids, they could miss out on signing the striker with Juventus reportedly set to make Manchester United a very tempting offer.

The offer which has appeared in all of the Saturday newspapers could see a swap deal involving Lukaku and Argentine forward Paulo Dybala.

Both attackers have been subject of plenty of speculation this summer, with Belgium international Lukaku not quite part of Ole Gunnar Solskjaer’s plans after losing his place in the team to Marcus Rashford.

Dybala, on the other hand, finds himself in a similar situation following Cristiano Ronaldo’s arrival in Turin last year. And, after scoring a winner and performing superbly against United in the Champions League last term, the Old Trafford faithful have reason to be excited about these rumours.

Juventus are preparing an offer for Manchester United striker Romelu Lukaku and willing to include Paulo Dybala as part of the deal – it has been claimed by Sky Sports.

Dybala has a good relationship with Paul Pogba and his possible arrival would likely go a long way towards settling the former Juve ace.

Solskjaer needs more creativity in the final third and with so much emphasis going on flying full-backs for the upcoming season, it would be beneficial to have another player – as well as Pogba – to pull the strings from a central position, though Dybala can play out wide too.

Lukaku doesn’t suit the style United are trying to play. It would be silly to reject such an offer if it comes in.