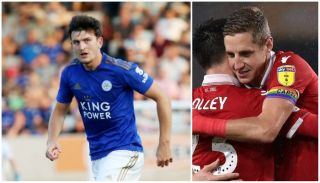 Everyone has had their say on Harry Maguire potentially joining Manchester United this summer.

The transfer is dragging on after Leicester City rejected two bids, though the recent injury to Eric Bailly may force Ed Woodward to increase the club’s offer for Maguire to get the deal over the line, which suggests the Foxes may have gained a stronger negotiation stance.

According to the Express, Leicester want £80m for Maguire’s signature to make him the most expensive defender in football, a title currently held by Liverpool’s Virgil van Dijk.

But Maguire will be worth every penny of the transfer fee, claims his former Hull City team-mate Michael Dawson.

“You’re thinking it will happen now because of the figures that are being banded around, you’re going to wonder how Leicester can turn that down,” Dawson told Sky Sports News.

“And one thing I would like to say is you’ve seen him play in all of the pre-season friendlies.

“You’ve seen some players trying to force moves by refusing to play.

“That’s one thing Harry has not done.

“He’s one of those characters, keeps his head down and works.

“When it does happen, which I do believe it will, because of the kind of figures and how can you stop a player like Harry, what he’s done for them, to go and play for a team like Manchester United, [it’s] a massive, massive football club.

“The figure that is being banded is incredible but rightly so after the few years he’s had at Leicester and obviously the World Cup he had last year.”

Dawson sounds critical of Leicester City’s stance — but at the same time, he is under contract at the King Power Stadium, and a player shouldn’t be praised for respecting his duties as a professional footballer.

Just because we see Laurent Koscielny act like a spoilt brat this summer, refusing to go on pre-season tour, it doesn’t mean other footballers will behave the same way.

Obviously, though, it’s a bonus signing a good character. The dressing room could do with more!