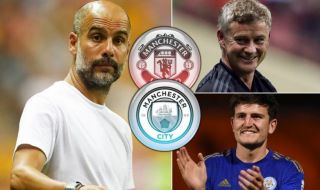 Manchester City manager Pep Guardiola has refused to rule out a move for Harry Maguire.

The Leicester City defender has been closely linked with a move to Manchester United all summer, though there’s always been a possibility that City would make a move too.

Vincent Kompany’s departure to Anderlecht was bound to see the Premier League champions linked with defenders, and Maguire is now seen as England’s best centre-back along with John Stones, who already plays for the blues.

Though if Maguire was to join Guardiola’s side this summer he’d probably get the nod over Stones and start alongside Aymeric Laporte.

However, there are no guarantees at the Etihad, with City in a stronger position on pitch than United.

The Red Devils are trying to rebuild and a lot of work needs to be done to Ole Gunnar Solskjaer’s defence. Maguire will like to idea of being one of the main players at Old Trafford, whereas at City that may not be the case.

He’s physical and brilliant on the ball, so it’s easy to see why Solskjaer and Guardiola would like to sign Maguire.

But Guardiola insists he would be happy with his current options if City don’t bring in a centre-back this summer.

“If we believe we can, if not we will survive without a new central defender,” Guardiola said, as quoted by the Mirror.

City have already signed Rodri from Atletico Madrid this summer while left-back Angelino has also returned to the Etihad. They’re also linked with a move for Dani Alves, which seems to be the case every summer.

When asked if he expects more arrivals, Guardiola continued: “No, not many. I like the faces that we have.

“Maybe but the transfer market is so difficult and the team is good enough. Maybe zero, maybe one, maybe one and a half.”

United’s sheer incompetence in the transfer market is nothing new, but if City really wanted Maguire you can be sure they’d have the deal done by now…