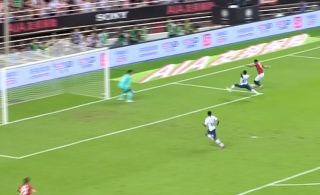 Manchester United take the lead against Tottenham Hotspur in Shanghai.

The Red Devils found the breakthrough after 20 minutes, thanks to a fine finish by Anthony Martial.

For his second goal of the pre-season tour, Martial breaks into the box with blistering pace and gets his shot on target from a tight angle.

He was unlikely not to have one early on when his effort four minutes into the match crashed off the post.

Paulo Gazzaniga, standing in for Hugo Lloris, is beaten at his front post and should have done a lot better.

But credit to Andreas Pereira for finding the pace and Martial in a dangerous position.

A deserved lead for United!