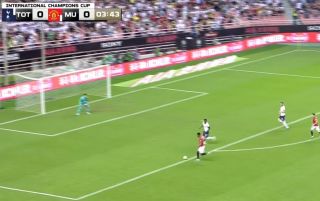 Just four minutes into the game and Manchester United hit the post through Anthony Martial.

A brilliant chance opened up for the Red Devils after Daniel James burst into attack mode before placing a wonderfully weighted pass into Martial.

The Frenchman hit the post early on after leaving the Tottenham Hotpsur defence for dead as well as the goalkeeper, who was saved by the woodwork.

It shows how deadly Martial can be if you give him chances.

He is playing up front with James and Mason Greenwood expected to provide the service, and the early signs are positive.