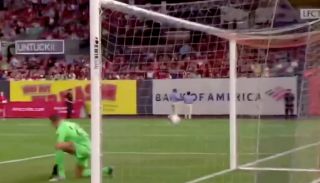 Sporting Lisbon ace Bruno Fernandes showed why Manchester United would be targeting him this summer by causing Liverpool a number of problems during their pre-season friendly on Wednesday night.

The match ended 2-2 at Yankee Stadium in New York, where Liverpool finish their pre-season tour of the United States.

Divock Origi and Georginio Wijnaldum scored the goals for Jurgen Klopp’s side, while Fernandes and Wendel found the net for Sporting.

According to Sky Sports, Fernandes is considered a primary target for United, and he would make a big difference to the side given how he cut Liverpool open for an assist, as well as a goal.

The goal itself came with some luck – but Fernandes was bold enough to have a go from 25 yards. Maybe he was just aware of how sh*t Simon Mignolet is between the posts.

Fernandes’ effort slipping through the Belgian’s gloves and into the net, as seen below:

Bruno Fernandes with a 🚀 against Liverpool, sign him already! 😂🔥 #mufc pic.twitter.com/xFhsdUnoQQ

But Fernandes also played a hand in Sporting’s second, assisting tea-mate Wendel to level the scoreline 54 minutes into the game.

He glided down the left wing before cutting in on his right foot in the penalty area and picking out his colleague, who struck home to equalise.

Bruno Fernandes with the composure and unlocked the pick of the best defence in the league of Trent, VVD, Matip and Robertson with ease😭pic.twitter.com/3SFbUMVJvd