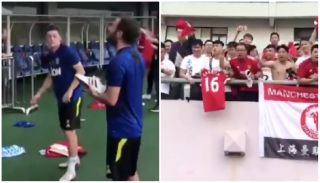 The open training sessions on tour have been a great opportunity for fans to see their favourite Manchester United stars put through their paces.

It’s obviously very different to watching the games — on tour and during the competitive season — and there has been plenty of footage with players taking time to sign autographs and pictures with those who are super excited to see them play across the world in their homeland.

The club’s official Twitter account has uploaded one video of United midfielder Juan Mata signing a shoe before flinging it into the crowd for one lucky supporter to catch.

But it’s the reaction of that supporter that will make you laugh.

He reaches for the shoe and reacts as though he’s lifted the World Cup.

We think this fan was pretty happy to get his shoe signed by @JuanMata8!#MUFC #MUTOUR 🇨🇳 #ICC2019 pic.twitter.com/K9XGocu5GP

If I were him, I’d have asked Mata for the second shoe. What good is one when you have two feet?